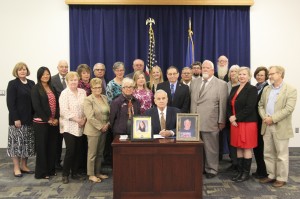 As chief author of the bill during the 2015 legislative session, Sen. Carlson was responsible for shepherding the legislation through the Senate and onto the Governor’s desk for signature, though he is quick to credit partners like Minnesotans for Safe Driving, the Dakota County Attorney’s Office, and House author Rep. Garofalo, (R-Farmington).

“Without the hard work of community members and advocacy organizations, today’s ceremony wouldn’t be possible,” remarked Sen. Carlson. “Because of their efforts, the consequences for distracted driving will more closely match the dangers of that behavior.”

“Enhancing these penalties sends a message to everyone that this is a serious issue,” Carlson continued. “The Minnesota families who have had their lives changed forever by distracted driving deserve this change in the law. We have a responsibility to make our roads safer and save lives in the future; this bill does just that.”