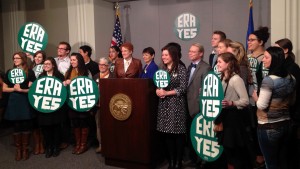 Sen. Pappas joined fellow legislators and ERA Minnesota (ERAMN) activists for a press conference to introduce legislation supporting gender equality and recognition of women in the United States Constitution. The press conference was held in conjunction with ERA Day at the Capitol and International Women’s Day.

Sen. Pappas spoke about Senate File 113, which would memorialize Congress to remove the deadline for ratification of the proposed Equal Rights Amendment to the U.S. Constitution by states. Sen. Pappas stressed the importance of reactivating the 35 states – including Minnesota – that ratified the equal rights amendment statewide before it expired by the 1982 deadline. She also noted that three more states are needed to reach the 38-state majority needed for an amendment to the U.S. Constitution. (S.F. 113)