Senators from across Greater Minnesota came together on Wednesday to present their ideas to drive greater investment in workforce housing, job training and workforce development in rural parts of the state. Several of the ideas grew from in-depth discussions last fall at Senate Rural Task Force meetings. Expanding job opportunities and connecting people to the jobs that are available are some of the major themes driving this package of legislation.

Click here to download a PDF flier highlighting the Senate DFL proposal to invest in jobs, housing, and infrastructure in Greater Minnesota.

“The goal is to connect young people to local jobs that are in high demand. Our rural businesses are experiencing a shortage of skilled workers – this legislation is meant to increase awareness of the types of positions that are out there and to connect the dots between businesses, students and schools,” said Sen. Saxhaug.

Senator Dan Sparks (DFL-Austin) is heading up legislation that incentivizes greater investment in workforce housing. The legislature has heard many stories from businesses who say a shortage of housing is a real obstacle to hiring and stunts their ability to expand. This legislation, which invests $50 million, is a combination of several successful programs from neighboring states who have experienced similar problems.

“This bill really tries to attack the problem on several fronts – for starters, by creating an Office of Workforce Housing we will have a system dedicated to this specific type of housing problem. We believe the tax credits will go a long way to attract investors, both small and large, while the grants will get a lot of housing projects off the ground,” said Sen. Sparks.

Senator Vicki Jensen’s (DFL-Owatonna) bill calls for $40 million to the Business Development Public Infrastructure Program and would provide the financial stability to operate and expand well into the future. This funding would ensure grants will be available for communities that need them (since its creation, the program has supported 166 cities with an average grant of $280,000). These grants fund public infrastructure improvements necessary for cities to either attract new businesses or help existing businesses expand by funding up to 50 percent of the capital costs for these improvements, and lead to expanded economic growth and increases to the tax base for cities across the state.

“I’m excited to bring this bill forward,” said Sen. Jensen. “We’ve seen the power of this program in my district, and these grants can absolutely mean the difference between attracting or retaining a business looking to expand and losing them to another community or state. This is exactly the type of program that the state should be running to help our local communities.”

Senator David Tomassoni’s (DFL-Chisholm) legislation involves a $15 million investment to implement a new and more flexible jobs training program designed for Greater Minnesota. This proposal also attacks the skills gap by reimbursing job creators for up to half of a training employee’s first-year wages. This program builds on the success of DEED’s Job Training Pilot Program and will be open to all employers in Greater Minnesota.

“The people in rural parts of the state simply haven’t experienced the explosive job and economic growth that the metro has seen in the last few years. Our businesses are asking for the state’s help in closing the skills gap, which will in turn lower the job vacancy rate and help our rural economy grow. This jobs training program will help do just that,” said Sen. Tomassoni.

Smart Broadband Investment to Strengthen ALL of Minnesota 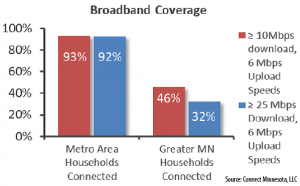 Senator Matt Schmit (DFL-Red Wing) is leading the ongoing push to bring high speed broadband access to Greater Minnesota. Bipartisan legislation would renew Minnesota’s year-old “Border-to-Border Broadband” competitive matching grant fund with $100 million for the next two years. Broadband serves as a multiplier effect for businesses, education, health care, and economic growth across the board. In order to keep Minnesota competitive in every corner of the state, effective and reliable access to 21st century technology is key.

“Broadband access is the great equalizer in Greater Minnesota, removing barriers – of time, distance, and geography, extending economic opportunity, and improving quality of life,” said Sen. Schmit. “However, with roughly 20 percent of Minnesotans lacking access to basic broadband, connectivity remains a concern. A renewed ‘Border-to-Border Broadband’ Fund will spur new investments in poorly-served areas of the state and promote job growth and innovation.”