Minnesota’s Price of Government is Going Down

Despite all of the rhetoric from right wing groups about taxes and spending, Minnesota’s total cost of government services for all Minnesotans will actually be less over the next four years than during the previous four.

In the 1990s, the Minnesota Chamber of Commerce successfully lobbied for legislation to require Minnesota Budget and Management (MMB) to calculate and publish a Price of Government (POG) percentage as an index of what taxpayers can afford. The bill passed and now taxpayers can see what our actual ‘Price of Government’ is. The POG is a measure of all state and local taxes collected that help fund government services. In Minnesota, the price of government is going down.

So, what exactly does that mean for you and your family? It means we’re making government cheaper – and that means at the end of the day, there’s more money in every Minnesotan’s pocket. In the last decade, we hit a high point in 2006 when we paid 16.2 cents of every dollar we earned to the government. Now that amount has fallen to 15.4 cents of every dollar – and projections show Minnesotans will continue to pay fewer dollars to the state and local governments every year through 2017, when we’ll pay just 14.6 cents! 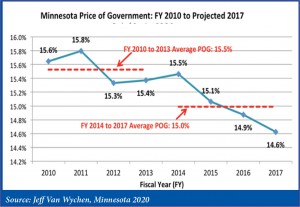 Minnesota Price of Government: FY 2010 to Projected 2017 (All the percentages on the left correlate directly to cents per dollar.)

In fact, the projected price of government will hit the lowest mark in the last 20 years – proof that our DFL-led government has successfully balanced the budget and eased the tax burden on Minnesotan families.

If we are paying less and are taxed overall less, many may ask why we have a surplus this year. The answer is pretty simple: because the Minnesota legislature responsibly balanced the 2013 two-year biennial budget through a mix of spending cuts and revenue increases, our state is in great shape. Nonpartisan MMB’s January forecast said Minnesota is finally in the black; we have a $1 billion budget surplus. The positive balance is reflective of the state’s healthy economic climate and of Democrats’ work to create a balanced budget that provides long-term financial stability. This positive budget balance is in stark contrast to the past three budget-setting legislative sessions, which faced deficits of $1.1 billion, $6.2 billion and $4.8 billion, respectively. The good news is that Minnesota’s economy continues to show progress and the state is on the right track.

By balancing the state’s budget for the long-term, reducing property taxes, and enacting $2 billion worth of budget cuts since 2011, the Minnesota Senate DFL has successfully lowered taxpayers’ costs – the Price of Government. In even better news for Minnesotans, it’s not a one-time lower tax bill – the cost will continue to go down for at least the next four years.