Minnesota’s Tax Structure among the Fairest in the Country, Improving Further

A recent report from the non-partisan Institute on Taxation and Economic Policy (ITEP) has found Minnesota’s tax structure to be among the fairest in the country. Grouped among the top seven least-regressive tax systems, Minnesota scored well for its very progressive tax policy, a high reliance on personal income tax instead of more regressive tax structures, and its use of refundable credits. 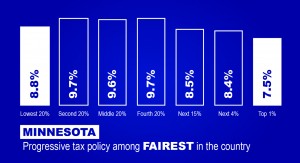 Minnesota’s tax system was championed by the ITEP, which applauded the state’s forward-thinking approach to funding state government. When compared to the national average, Minnesota’s taxes are much less burdensome than the national average, which sees the richest one percent of Americans paying almost half what the poorest 20 percent do in terms of tax burden on families. 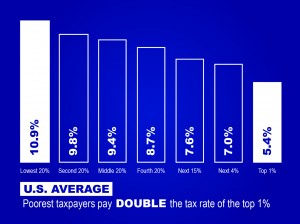 While the nationally averaged tax burden for the poorest 20% of Americans is almost double that of the richest one percent, Minnesota’s taxpayers see a relatively modest difference. The poorest fifth of Minnesotans give a total of about 8.8% of their income in state and local taxes, while the richest give 7.5%.

The report is careful to note that virtually every state’s tax system is fundamentally unfair in some way, but praised Minnesota in particular for adding a new top income tax bracket and increasing the Working Family Tax Credit.

Minnesota is set to make even more improvements to our tax system, as both the House and the Senate have passed the Tax Conformity bill, which extends tax breaks and credits to thousands of working Minnesotans. Tens of thousands of students, teachers, homeowners, business owners, and other residents from all over the state will benefit from this legislation.