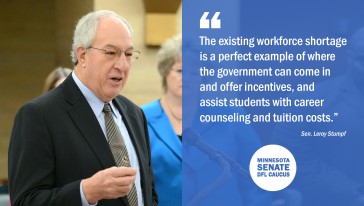 In an effort to help stem Minnesota’s workforce shortage and offer a new path for students to access quality higher education, Sen. LeRoy Stumpf (DFL-Plummer) has chief authored the College Tuition Relief Bill. The bill, S.F. 2, proposes to pay for two years at a MnSCU campus school if students meet several qualifications. Sen. Stumpf says the idea is based on a similar program in Tennessee (Tennessee Promise) and came to him after taking extensive tours at MnSCU campuses across the state during the Senate’s bonding tours in 2013.

“Minnesota’s workforce needs are changing, and that became clearer to me during the bonding tours when I spoke with students at every MnSCU campus in a number of diverse, technical degree programs, many of whom had job offers before they even graduated. This bill addresses the lack of skilled employees, while simultaneously giving students a more affordable alternative to the 4-year degree route,” said Sen. Stumpf.

In order to qualify for the program students must come from a family making less than $125,000 per year, enroll immediately following their high school graduation, maintain a college GPA of 2.5 and take a minimum of 30 credits per year. Additionally, students will be required to meet with on and off-campus mentors to develop both academic and career focused success plans. Qualifying students must be enrolled in a vocational or technical degree program as defined by the federal Carl D. Perkins Career and Technical Education Act which offers a wide range of degree options. The bill will cost $24.4 million for the FY16-17 biennium, and $30.5 million for each biennium going forward.

According to a 2011 study by the Minnesota Department of Employment and Economic Development (DEED), the entire state is suffering from a moderate to severe workforce shortage, with Northwest Minnesota most affected having 54 percent of companies reporting a shortage. DEED also reports that by the year 2020, 74 percent of jobs in Minnesota will require some post-secondary education, creating a sense of urgency among companies looking to hire. Additionally, Minnesota ranks fifth in the nation for student debt loads, the average debt is approaching $31,000 per student.

“Part of the role of the government is to assist businesses when the marketplace is not filling a void. The existing workforce shortage is a perfect example of where the government can come in and offer incentives, and assist students with career counseling and tuition costs,” said Stumpf. “When companies are able to find the labor they need, businesses can grow which in turn helps our economy thrive.”