(St. Paul, MN) – As high school students and their families make plans for attending college in the fall, one challenge may be finding ways to pay for it. A new grant program provides the perfect option. Thanks to legislation passed in 2015, qualifying students can attend college for free by studying the skills and trades, giving them the competitive advantages needed to succeed in a 21st century economy – while also addressing workforce shortages being felt across the state. Passed in the Senate Higher Education Omnibus Bill, this Two-Year Occupational Grant Pilot Program at Minnesota State Colleges and Universities (MnSCU) gives qualifying students seeking a degree in high-skilled, high-demand areas, the opportunity to have much of their education paid for.

“Minnesota’s workforce needs are changing, and that became clearer to me during the bonding tours when I spoke with students at every MnSCU campus in a number of diverse, technical degree programs, many of whom had job offers before they even graduated. This program addresses the lack of skilled employees, while simultaneously giving students a more affordable alternative to the 4-year degree route,” said Sen. Stumpf.

Chair of the Senate Higher Education Committee, Senator Terri Bonoff (DFL-Minnetonka), praised this and other efforts to support students and workforce needs throughout the state. 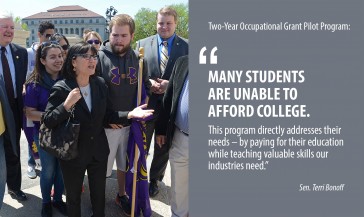 “Minnesota is facing an unprecedented demographic shift in our state, as older workers are retiring and as more and more jobs are requiring technical skills that many people don’t have. At the same time, many students are faced with obstacles when paying for college. This program is a great way to address all of these issues – helping students pay for their education while learning the skills our industries are looking for. As high school students consider their futures, I encourage them to learn more about this program and the options tech and community colleges offer,” said Sen. Bonoff.

This program is open for those enrolling for the 2016 fall semester in a qualifying certificate, Associate of Science (AS) or Associate of Applied Science (AA) programs at a MnSCU two-year college. Students should enroll soon, as grants are only available for academic terms during the two years immediately following high school graduation, completing an adult basic education program or passing all GED tests.

To qualify for a grant, students must meet one of the following criteria:

In addition to meeting one of the above qualifications, students must also meet the following criteria:

To apply for the initial grant for the 2016-2017 academic year, students must complete the 2016-2017 FAFSA which is available in January 2016. Due to limited funding, students are advised to apply as early as possible, since applicants will be ranked by application date.

More information about the program is available at OHE’s website here: http://www.ohe.state.mn.us/mPg.cfm?pageID=2163

For more information about this or any legislation, please contact Sen. Terri Bonoff at (651) 296-4314 or by email at sen.terri.bonoff@senate.mn.