ST. PAUL, Minn – State Senator Foung Hawj (DFL-St. Paul) is working to ensure the passage of a bill to bring our state’s driver’s licenses in compliance with the required federal REAL ID standards. The bill would allow the Department of Public Safety to make technical changes in Minnesota’s statutes and licenses that would ensure Minnesota IDs continue to be a passable form of identification for air travel.

REAL ID compliant licenses are already required to gain access to certain federal facilities such as military bases and nuclear plants, and early next year they will be needed to board airplanes – even for domestic flights. Unless the 2017 Legislature acts to begin issuing REAL IDs, Minnesotans will not be able to board a commercial airplane beginning Jan. 22, 2018, without presenting additional, federally authorized proof of identity, such as a U.S. passport. Minnesota is one of only three states that has not changed its licenses to comply with the federal requirements.

This bill is the last step Minnesota needs to take to come into compliance with federally mandated REAL ID standards. Many Minnesotans are waiting to find out how they will best be able to proceed with air travel as the deadline for compliance approaches. The main sticking point that continues to tie-up this urgent legislation is an attempt by the House Republican caucus to attach controversial language related to undocumented immigrants access to limited licenses. That issue has been controversial at the capitol for a number of years, and the House Republican effort to attach it to the REAL ID bill has stalled this important legislation.

“I’m hopeful the House language will not become part of the final law,” Sen. Hawj said. “Enough is enough. It’s time for Minnesota to pass a clean bill and finally become fully compliant with the necessary federal standards under the REAL ID Act.” 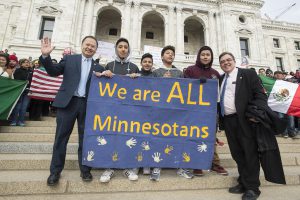 Senator Hawj stands with constituents at the Capitol during the Day Without Immigrants Rally.