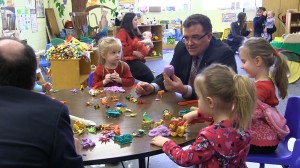 Sen. Hoffman and Sen. Sieben are both passionate advocates for greater investment in early childhood education programs. The ECFE program they visited helps prepare young children for kindergarten while also providing parents with the opportunity to meet with other families and licensed parent educators to discuss topics like development, temperament and guidance.

“The tour included showing us what evidence-based programs look like. The programs help create a strong foundation for our youth to work toward becoming part of the world’s best workforce,” said Hoffman. “The Coon Rapids Family Place is a great example of what has been working so well in the Anoka Hennepin School District. Young students are eager to learn and will continue to grow in kindergarten and beyond when they are in an inspiring classroom setting.”

The group heard from teachers and district officials about the effectiveness of the ECFE programs and how parents frequently comment that they wish their child could attend the programming five days a week. Teachers also testified that it’s easy to tell which students do not attend pre-k programming. ECFE programs help children learn how to follow routines and rules, get along with other children and learn introductory reading, writing and math skills as well as art and music.

Hoffman hopes this early childhood programming can be made available to all Minnesota youth. That’s why he’s chief authored a bill that would make 4K programming available in schools statewide.

“Minnesota is the only state to have the ECFE program, and you can see the difference it’s making in students’ and families’ lives. However, where a student and family lives shouldn’t dictate their ability to excel. This is why I’ve introduced my 4K for Kids bill in the Senate; I believe we are investing in Minnesota’s future by making early education a priority for all kids,” said Hoffman.

If you would like to watch a video of Sen. Hoffman and Sen. Sieben’s trip, visit: https://www.youtube.com/watch?v=2ex5lWLM1YQ&feature=youtu.be