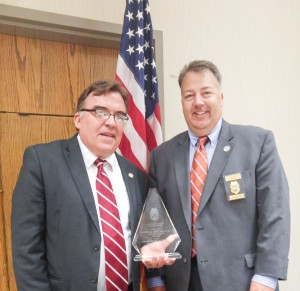 ST. PAUL, Minn– Citing his dedication to the safety of Minnesota police officers and other emergency personnel, the MPPOA honored Sen. John Hoffman (DFL-Champlin) this week with its 2016 Legislator of the Year award.

“Senator Hoffman understands the challenges police officers face on a daily basis. He has a keen understanding of the importance of public safety and the association recognizes his concrete efforts in helping law enforcement to provide for the safety of our communities and the protection of our members” stated Minnesota Police and Peace Officers Executive Director, Dennis Flaherty.

Senator Hoffman was the chief author of legislation this session designed to assist peace officers and other emergency personnel should they obtain significant exposure to bodily fluids while on duty and thus, face the risk of infection. There has been long standing protocol in state law that dictates how hospitals must deal with emergency workers who face infection risk from blood borne pathogens, but the law had not addressed these same concerns for police and emergency personnel until this year. Flaherty said Hoffman’s legislation will allow a court to order an individual to submit blood for testing.

“I’m very honored to receive this award from MPPOA. Law enforcement officers put themselves in harm’s way every day in order to keep their communities safe. Ensuring they are protected when members of the public may have infected them with a serious disease is the least we can do. It’s been great working with MPPOA this past session on this legislation, and I look forward to doing more good work with them in the future,” said Sen. Hoffman.

Hoffman also co-sponsored legislation this session clarifying the statute of fourth degree assault against a peace officer, which provides enhanced penalties for physically assaulting a police officer or for intentionally throwing or otherwise transferring bodily fluids or feces at or onto the police officer. Both of Hoffman’s provisions were signed into law by Governor Mark Dayton.