ST. PAUL, Minn – Sen. Steve Cwodzinski (DFL-Eden Prairie) had his first bill hearing in the Senate on Tuesday. The bill would change the state’s graduation requirements to require all high school students to take a course in civics. After teaching American Government courses for over 30 years before being elected to the state legislature, Sen. Cwodzinski says he is concerned by a significant number of our students lacking basic knowledge of government.

“Understanding our government is critical to being an active participant in this great democracy. I’m afraid that too many young people aren’t learning the basic components of how our government operates – this is dangerous to the future of our society. I’ve authored this bill to remedy this problem, and to ensure young people in Minnesota are prepared to be actively involved in the government of the people,” said Sen. Cwodzinski.

The bill requires that high school students take at least one half-credit credit of civics in either grade 11 or 12. The new requirements would be effective for students entering grade 9 in the 2017-2018 school year. 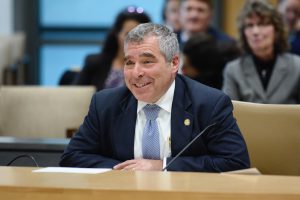 Senator Steve Cwodzinski presents his first bill in front of the Education Committee in the Senate. 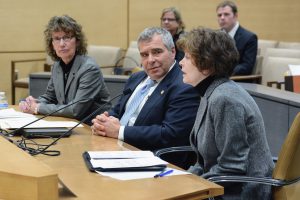 JoEllen Ambrose, Sen. Cwodzinski, and Jennifer Bloom testify on a bill that would requires a Civics credit for graduation.