Senator Foung Hawj (DFL-St. Paul) on September 8 participated in a grand opening ceremony for new Sepak Takraw courts at the Duluth & Case Recreation Center in St. Paul – the first courts of their kind in the nation. The celebration featured officials from Sepak Takraw of the USA, Inc., the City of Saint Paul Parks and Recreation Department, and the Saint Paul Parks Conservancy, who formed a joint fundraising campaign to help finance the project.

Photos and video of the grand opening ceremony are available here. 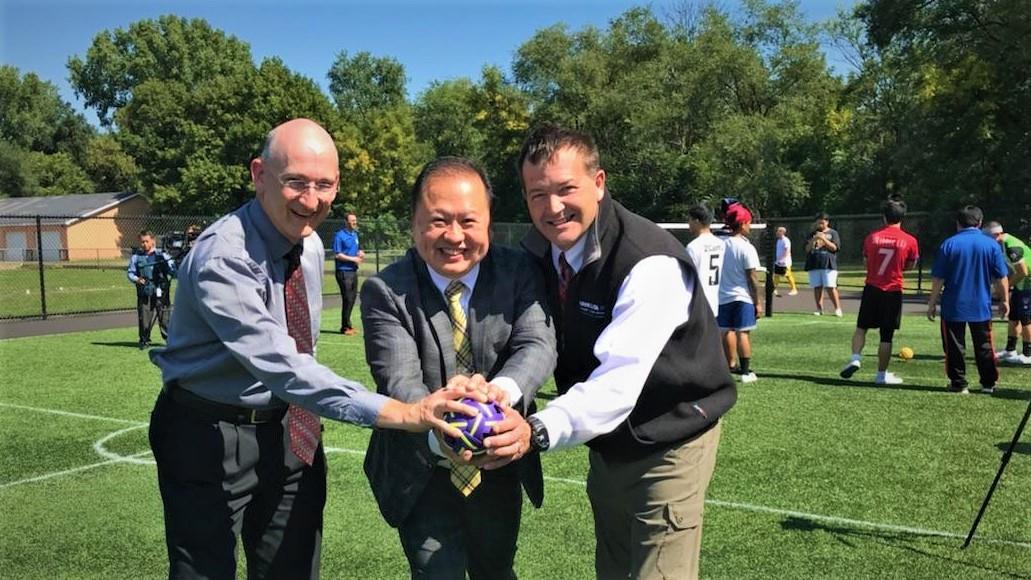 “I am pleased that youth and adults will now have a new place to gather, be safe, and have fun in St. Paul,” said Sen. Hawj. “A lot of people worked hard to turn this project into a reality, starting with community leaders who organized at the grassroots to bring this idea to our public officials. Thank you to everyone who got involved. The best Sepak Takraw players are here in our state. I know that every time Team Minnesota sets foot on the court, the other side would tremble. That is the pride I like to have for us and for Minnesota. I invite Minnesotans of all cultures to visit the recreation center, learn about the sport, and try it out yourself. This is an opportunity to bring people together to build more vibrant, inclusive communities.”

Sepak Takraw, or Kato, is a traditional Southeast Asian sport that mostly resembles volleyball but requires players to use only their feet, knees, head, and chest, much like soccer. The ball is roughly 5 1/2” in diameter and woven rattan (traditionally) or synthetic rubber. Typically, two teams of three players each play on a 20’ x 44’ court separated by a 5’ high net. An official match is won by the best of 3 games each played to 21 points.

Below is an excerpt of remarks made by Mike Hahm, Director of City of St. Paul Parks and Recreation Department at the September 8 grand opening ceremony.

“In order to have a city that works for all, you need a recreation program that works for all. I could not be more proud of the people and professional staff that came together to build our sepak takraw courts and run facilities like this here every day.”