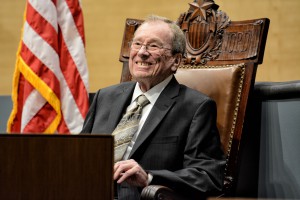 St. Paul, Minn.— Senator Jim Metzen (DFL-South St. Paul) was honored on the floor of the Senate this week, when nearly two dozen senators of both parties stood up to speak about the former President of the Senate. The long-serving Senator has decided not to run for re-election this year, and his colleagues took the opportunity to thank him for his leadership and service when he filled in to temporarily preside over the Senate again.

Many Senators shared memories of their time serving with Metzen, often prompting outbursts of laughter when sharing stories of nicknames, famous caricatures, and committee experiences. Others thanked him for his calm and steady demeanor when presiding over the Senate.

Senator Gazelka (R-Nisswa) is the Republican lead on the Commerce Committee that Sen. Metzen has chaired for the past several years, and stated, “I felt that we did right by the state. It was probably the least partisan of all committees. […] It was a rich tradition before you, […] and you continued that tradition where we felt our voice was heard.”

Senator Wiger (DFL-Maplewood) remembered one of Sen. Metzen’s major accomplishments in his success with the Mighty Ducks funding program, and noted, “You are such a passionate fighter for your district, and all you have to do is look at the bills that we end up getting passed. You have been successful through the trust you have developed with us.”

Senator Metzen served as President of the Senate from 2002 to 2010. Known and respected as a fair and light-hearted President, Senator Metzen led the way regarding bipartisanship, as he was the first President to have a President Pro Tem from the opposite party. Often, Senator Metzen would allow low-seniority Republican members to chair the Senate, a gesture that helped bridge political differences and foster productive working relationships.