Senator Roger Reinert will not seek re-election in 2016 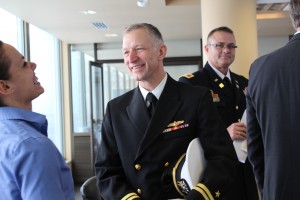 DULUTH, Minn – After serving nearly 15 years in public office, Sen. Roger Reinert (DFL-Duluth) announced today he will not run for re-election in 2016. Reinert said the time was right to step away. “2015 was amazing. I finished my first year of law school, was promoted to Lt. Commander in the Navy, and most importantly – got married. 2016 is the right time for the next chapter of life.”

As a member of the Senate, Reinert served on the Taxes, Transportation and Public Safety, and Commerce committees. Reinert also served in the Higher Education Committee in the Minnesota House.

After serving for 13 years, Reinert feels 2016 presents a natural ending to this chapter of life. “I am truly thankful for the honor and privilege to serve the community I love. My work is not done though, and I look forward to advocating for Duluth during the 2016 legislative session,” said Sen. Reinert.

“I believe in lofty concepts like citizenship and democracy, and I believe in serving your community. I initially ran for the Legislature to try and make the state a more reliable partner to local governments. I’ve worked hard to fulfill that pledge during my time at the State Capitol.” 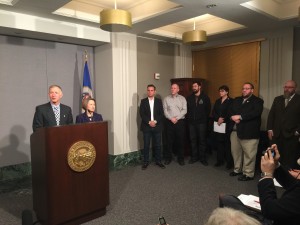 Reinert was chief author in 2013 of the LGA (local government aid) redesign legislation, and as a result Duluth saw its largest allocation of aid in nearly 20 years. Reinert also worked on the Duluth City Council and later in the Legislature to support the dramatic changes that have taken place in Duluth over the past decade. His efforts include state investment in the construction of Amsoil Arena, the new terminal at the Duluth International Airport, and required wastewater infrastructure improvements. Reinert also authored and supported changes to help Duluth address its unfunded retiree healthcare crisis. More recently, Sen. Reinert authored several bonding projects focused on the St. Louis River corridor including $3.4 million to Spirit Mountain, and $2.3 million to Wade Stadium. He has also been a long-time advocate for the Lake Superior Zoo.

Reinert has also been a legislative champion for repealing the ban on Sunday liquor sales. During his tenure Minnesota has seen the most progress on this issue in state history. Two years ago he authored the legislation that allowed Minnesota craft breweries to keep their doors open on Sunday, and this past session he chief authored legislation to allow Minnesotans to also buy growlers on Sundays, and to allow micro distilleries to serve and sell product on-site.

As his final legislative session approaches, Sen. Reinert says he’ll be pushing hard for the passage of a comprehensive transportation funding package as well as a fair and balanced tax bill. He also plans to work hard on a variety of Duluth-area bonding project proposals.

“As a runner, I learned long ago you don’t back off at the end of a race – you push hard all the way through the finish line. Duluthians can expect that same mentality from me in my final year at the Legislature,” said Reinert.