“Above all, this recognition offers further proof that Minnesota’s focus on extending high-speed Internet access throughout the state is a smart investment,” Schmit said. “The award speaks to the vital importance of broadband in our daily lives. It’s a matter of quality of life and rural competitiveness – for our families, farmers, schools, businesses, and communities alike.” 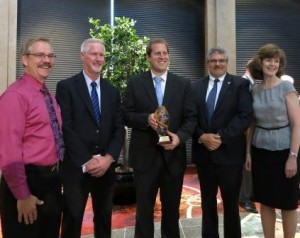 The award recognizes Schmit’s efforts leading up to and during the 2014 legislative session to create Minnesota’s “Border-to-Border Broadband” competitive grant fund, with an initial $20M state appropriation to spur local and private investment in new or improved broadband networks in hard-to-serve areas of the state.

“The creation and recent launch of the ‘Border-to-Border Broadband’ fund is the direct result of continued interest and engagement of countless Minnesotans in this very important effort. Following a decade of task force recommendations, state speed goals, philanthropic activity, and community discussions, Minnesota has taken an important step both in promoting new investments and being a leader in broadband access. I sincerely hope all communities and providers that have struggled to extend broadband connectivity will take advantage of the grant program and submit an application to demonstrate their interest and need,” Schmit said.

Minnesota’s Department of Employment and Economic Development (DEED) announced the launch of the initial application window last week as Minnesota takes its first major step in providing fast and reliable broadband throughout the state. The grant application is available at mn.gov/deed/about/contracts.

Schmit was previously recognized by the League of Minnesota Cities and Greater Minnesota Economic Development Partnership for his work on extending broadband access to all Minnesotans.