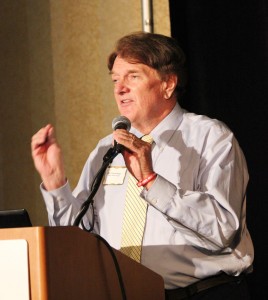 (St. Paul, MN)— Senator Chuck Wiger (DFL-Maplewood) has recently been awarded the 2015 Public Official Award by the Minnesota Nurses Association in recognition of his work on S.F. 1071, the Violence against Health Care Workers Bill. Attacks on health care workers have been in the news more regularly in recent years, most dramatically in the case of an attack on four nurses at St. John’s Hospital almost one year ago.

“No one deserves to feel unsafe in their job,” remarked Sen. Wiger. “The end goal of this legislation is to create a safer workplace for all health care professionals, and a system for violent acts to be reported and recorded, so that hospitals can better track why and where violence is happening in an effort to reduce and eventually end all violence.”

The bill requires hospitals to have a violence prevention plan by early 2016. The plan must be drafted by a committee of hospital staff, including health care workers. Hospitals also will be required to offer violence prevention training. The legislation, signed by the Governor, is designed to provide adequate training, staffing, and security to healthcare workers who are faced with workplace violence.

“Our healthcare teams are quite literally life-savers, and they deserve the peace of mind they need at their jobs to care for their patients,” said Sen. Wiger. “I am honored to have received this recognition, and hope that my colleagues in the legislature will continue to support our efforts to minimize violence in the workplace.”