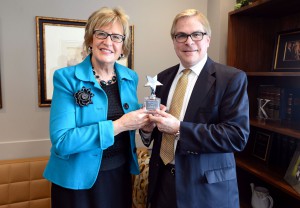 This afternoon, Senator Kathy Sheran was presented the 2015 Children’s Health Hero Award from Bob Bonar, the CEO of Children’s Hospitals and Clinics of Minnesota. The award recognizes Sen. Sheran’s work and advocacy on behalf of children over her three terms in the Minnesota Senate. Also joining in the presentation was Kelly Wolfe, Public Policy Director for Children’s Hospitals.

“On behalf of Children’s Hospitals and Clinics of MN, I am honored to present Senator Sheran our 2015 Children’s Health Hero award for being a legislative champion for children. Senator Sheran has been a tireless advocate during her time in the legislature. From her leadership of the Freedom to Breathe Act to her work on the Child Protection Task Force, she has been an effective voice at the Capitol for the health and well-being of Minnesota’s kids. We are thankful for her passion and dedication to ensuring that our children have access to high quality health care and safe and supportive environments.”

“I am deeply honored to receive this award from Children’s Hospitals. Throughout my career in the Legislature, I have been focused on ensuring we properly protect and treat our most vulnerable citizens. Alongside colleagues on both sides of the aisle, we have taken a critical look at our child health and welfare policies and acted upon concrete steps to improve the services we provide to children across the state. As chair of the Senate HHS Policy Committee and Legislative Task Force on Child Protection, I have worked hard to ensure our public programs serve the bests interests of children in Minnesota. In particular, I have secured necessary reforms for rural Minnesota, which is often underserved in our health and welfare systems.”

During her nine years in the Senate, Sheran has been a leading advocate for improvements to Minnesota’s health care and human services systems, particularly with respect to children. She has authored legislation supporting psychologists in schools, restricting e-cigarette sales to minors, prohibiting smoking in restaurants and other spaces occupied by minors, and funding a comprehensive improvement of the Child Protection system. Beginning in 2013, Sen. Sheran has chaired the Health, Human Services, and Housing Policy Committee, through which many additional child protection bills have been heard and passed. This session, she has been a leader in bipartisan efforts to improve funding, expand coverage, and implement reform in Minnesota’s foster care system.

Over the past two years, Sen. Sheran has co-chaired the Legislative Task Force on Child Protection, which has worked with stakeholders across Minnesota to review and improve child welfare programs. On Feb. 1, the task force released a comprehensive report on the progress of child protection legislation and additional recommendations for legislative changes. Sen. Sheran is also advancing legislation which would extend the life of the task force until 2020.