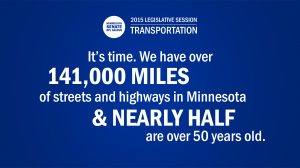 The Senate transportation finance bill, a comprehensive bill to address Minnesota’s transportation needs, was released this week. The legislation increases revenue for transportation funding to just under $800 million, with an additional $567 million for local roads and bridges through General Obligation (G.O.) bonds.

According to the Governor’s Transportation Finance Advisory Committee, the state is projected to have a $21.2 billion dollar funding gap over the next 20 years for our transportation system just to maintain the status quo, and a $54.6 billion shortfall if we want to compete internationally. In fact, adjusted for inflation, MnDOT is at the same level of funding today as it was in 1997, even as Minnesota has grown in population and as our transportation network has aged.

The plan provides dedicated revenue for transportation through several methods:

The Senate legislation prioritizes road and bridge repair, expands economic corridors across the state, and increases the ability of all Minnesotans to get where they need to go in rural, suburban, and metro areas. (S.F. 87)