100th Anniversary of the Navy Reserves 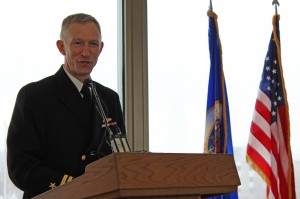 In honor of the 100th anniversary of the Navy Reserves, Gov. Mark Dayton has proclaimed March 3 as ‘Navy Reservist Day in Minnesota.’ The official proclamation was formally announced at a celebration event in St. Paul at the Veterans Administration Building. The event speakers included Commanding Officer Capt. Brent McMurray, St. Paul Mayor Chris Coleman, and Sen. Roger Reinert (DFL-Duluth). Richard Thill, a USS Ward sailor and “First Shot” Club member was the guest of honor and had the opportunity to perform a traditional Navy cake cutting.

Speakers at the event highlighted the number of Minnesotans who have served in the Navy Reserves since its original creation, when the Minnesota Legislature authorized the Minnesota naval militia in 1899. Since 9/11, 70,000 reservists have fought in the War on Terror. During the height of World War II, 3.4 million American sailors were fighting in the Navy. Mayor Chris Coleman added that his father served in the Navy in WWII, and that 1,500 National Guard and Navy Reservists are currently stationed in St. Paul.