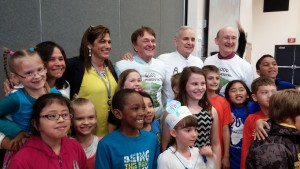 ST. PAUL, Minn. – A bill that searches for answers to White Bear Lake’s water issues is being introduced in the Minnesota Senate tomorrow by Sen. Chuck Wiger (DFL-Maplewood). The bipartisan bill — co-authors include Sen. Roger Chamberlain (R-Lino Lakes) – will study the effectiveness of an augmentation system. The bill is a demonstration of all parties coming together to work towards a sustainable remedy to the issues that have been plaguing the lake for a decade.

The $3.63 million bill includes a $1.5 million appropriation to evaluate the long term water supply and sustainability in the north and east metro area. The bill also dictates that the study will examine how water quality could be maintained under an augmentation system or any other potential impacts to the ecology of White Bear Lake. The other major component of the bill requests $1.7 million to perform augmentation planning and preliminary engineering tasks. This includes collecting soil samples and determining the need for a tunnel.

“I’m really proud that so many different stakeholders in this issue have come together to support this legislation. It’s important to me that we find a sustainable and affordable solution to the White Bear Lake water issues that also enjoys local support. These studies will give us the credible, scientific evidence we need to proceed down a long-term path to finding a sustainable solution,” said Sen. Wiger.

“This bill addresses our council’s concerns on water quality and operating costs, not only for the augmentation, but also for potential surface water costs,” said White Bear Lake Mayor Jo Emerson.

“The City Council and I want to thank Sen. Wiger and local legislators for addressing the concerns of Vadnais Heights as it relates to the White Bear Lake augmentation. We look forward to continuing to work with you as this legislation progresses to ensure a positive outcome,” said Vadnais Heights Mayor Marc Johannsen.

The bill is currently under consideration for inclusion in the Senate’s Bonding Bill.