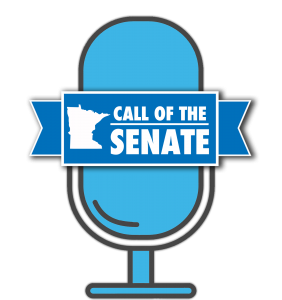 Our most senior senator was born and raised in his hometown neighborhood of Highland Park. Now representing the area, Senator Richard “Dick” Cohen has worked on numerous bills and legislation over the years, including the “spouse abuse” bill, the Equal Rights Amendment (ERA), and the Legacy Amendment. Tune in to hear about Senator Cohen’s love of the arts and how it came from his mother, who brought him to the movies, orchestra, and the theater. His love of the arts was brought to the national stage in 2009, when President Obama appointed him to the President’s Committee on the Arts and Humanities.

“He’s an iron man from an iron country!” Growing up in the heart of the Iron Range, Senator David Tomassoni can attest to the rich history of immigration, iron mining, and labor unions that makes up his 150-mile wide Senate District 6. Since his first election in 1992, Sen. Tomassoni has been a key advocate for the voices of rural Minnesotans at the Legislature. Listen in to find out how this Italian Olympic hockey player went on to become a Minnesota State Senator.

Senate DFL media has released a special “Spring Break” edition of the Call of the Senate podcast featuring Senate DFL leadership. DFL leaders in the Minnesota Senate came together to ask Senate Republicans to work across the aisle on shared priorities like supporting students, increasing access to health care, and ensuring safe and fair workplaces for all Minnesotans. In one of only two divided legislatures in the United States, bills for statewide progress have been refused public hearings in the Republican-controlled state Senate.

Our youngest DFL Senator grew up in Lakeville’s Bermuda Triangle, where his parents still live in his childhood home. Senator Matt Little loves his hometown so much that at age 25, he became a city council member and two years later, he became the mayor. The grueling schedule of being a mayor and going to law school taught Senator Little how to handle being a state senator. Learn more about this no-tag-wearing Senator and his legislative priorities this session including getting Metro Mobility in his district, reducing the costs of insulin, and continuing his bipartisan politics.

A lifelong resident of Golden Valley, a graduate of Harvard Law School, a former City Councilor, two-term State Representative … and a lover of show tunes? Senator Ron Latz has become the the go-to voice on the Senate floor for all things public safety and addressing the complicated issues faced by our judicial system every day. Learn more about his fight for common-sense gun violence reduction, reforming parole, and net neutrality for Minnesotans.

As a lifelong Duluthian, Senator Erik Simonson knows that it’s one of the best-kept secrets in the state. A firefighter for 27 years, including 10 years as the firefighter union president, he’s been a longtime dedicated public servant and problem-solver, an attitude he continues to bring to the Legislature. Learn more about Senator Simonson and the work he’s doing for Duluth and the challenges facing Northeastern Minnesota.

“Forward” is a great direction to head. After discovering his passion for education at Fargo Community High School, Senator Jason Isaacson has been on the move and making change ever since. He can attest to the transformative power of learning as well as to the importance of considering how where we come from helps shape our values and our opportunities. Tune in to this episode to hear more about how Senator Isaacson (Ike) is working with his colleagues at the Capitol to expand opportunities for all Minnesotans to move forward together.

Senator-Doctor or Doctor-Senator? That’s the question for Senator Matt Klein, one of two physicians in the Minnesota State Senate, a one-time Russian Literature major who found his calling as a doctor. Learn about how he uses his health care background to work on reducing health care costs, increasing accessibility, preventing gun violence, and holding pharmaceutical companies accountable.

Currently serving her 9th term, Senator Sandy Pappas has almost seen it all here in St Paul. Over the course of her 30+ years in the capitol, Senator Pappas has been a fierce advocate for gender equality, the working class, and Minnesota’s immigrant communities. She was the second female President in the history of the Senate, and she continues to fight for fairness and civility in Minnesota. Hear about her diverse experiences serving as a state legislator, as well as her personal background.

In his 31 years as an American Government teacher in Eden Prairie, Senator Steve Cwodzinski never once regretted a Monday or looked forward to a Friday. He brings the same joy and passion he had as a teacher in serving as a State Senator and continues the fight for students in working to close the achievement gap. Hear more about his passion for service in this episode of Mr. Cwodzinski goes to St. Paul, wait, we mean, Call of the Senate.

Senate DFL Leader Tom Bakk has been negotiating deals since 1978 when as a 24-year-old he joined the statewide negotiating committee for his carpentry union. Though much has changed 41 years later, his goal remains the same: to improve people’s lives and raise their standard of living. Hear straight from this Iron Ranger about the legacy he hopes to leave and what the biggest roadblock is to his first tweet.

In the inaugural episode of Call of the Senate we are joined by Assistant Minority Leader Senator Susan Kent! Though she was born in New Orleans and went to college as a Longhorn, Minnesota’s schools are what brought her to Woodbury and to the Senate. With a long line of educators in her family, Kent ran for office to make sure Minnesota’s schools stay world class. Hear about how she and her colleagues are working to keep this promise for our kids.

Since winning his first election as a 21-year-old college student, Senator Chuck Wiger has dedicated his life to public service. Wiger is the Senate’s “Evangelist of Education” making Minnesota’s students and their education his biggest priority. Now in his 23rd year as a Senator, this episode reveals how a phone call to Harmon Killebrew brought this one time high school dropout from picking oranges in Florida to being chair of the Senate E-12 Committee.

Since immigrating to Minnesota from Columbia at the age of 23, Senator Patricia Torres Ray has activated her passion for community public service. With a strong commitment to equity, Torres Ray has led robust efforts to address achievement gaps and racial disparities in our state. Learn more about how family values, volunteerism, and child advocacy have led her to become the first Latina elected to the Minnesota Senate.

East Bloomington, Minnesota has been Senator Melissa Wiklund’s home since she was a baby – in fact, her husband and two kids live within blocks of her childhood home. Listen to Senator Wiklund talk about her two college degrees in totally different fields (interior design and electric engineering), how a year in Finland brought the love of weaving/knitting into her life, the importance of education, and the issues facing health care in our state today.

Senate DFL media has another special edition of Call of the Senate with Minnesota’s lieutenant governor! Growing up with limited means in St. Louis Park, Lt. Governor Peggy Flanagan knows how to work hard to be successful. This Wellstone Action Alum is the first Native-American woman to be elected to Lt. Governor in the nation. Listen to this episode to learn how Lt. Governor Flanagan is tackling the issues of health care, education, and showing the values of community prosperity in the state of Minnesota.

This special edition of the podcast includes Senator Nick Frentz interviewing our host, Senator Jeff Hayden. Senator Hayden talks about growing up in Minnesota until the 8th grade, then his time in San Francisco until he decided to move back after college to his home state. Learn more about Senator Hayden’s important work in health care, gun legislation, and how marriage equality was his proudest moment in passing legislation. This bicycle-loving Senator will also tell you how to cook the Sous-vide way.

Since his Dad was in the Air Force, Senator Scott Dibble didn’t have the typical childhood, he grew up all over the world, but his family roots in Minnesota going back four generations, brought him here. Listen to Senator Dibble tell you about the issues he is passionate about: LGBTQ rights, homelessness, community prosperity, transportation (no, he’s not a nerd), marriage equality, and learning to knit.

After 23 years in the military, 18 of them spent overseas, Senator Jerry Newton opened a neighborhood grocery store. Hearing stories from his customers about their lives and community, he decided he needed to run for office and give back to his community even more. Listen to Senator Newton talk about his first legislation for veterans, special education in our schools, and personal care attendants.

Commitment to community has run in Senator Karla Bigham’s family for generations. A lifelong resident of Cottage Grove, a proud owner of a Ph.D. (Park High Diploma) she has done a little bit of everything as a public servant – House Representative, County Commissioner, and now as a State Senator. Hear more about her bipartisan work and how she represents people, not parties.

For over 40 years, Senator Greg Clausen was a classroom teacher, coach, assistant principal, high school principal, and district office administrator. When he’s not tinkering around restoring old cars and boats, Senator Clausen is helping the homeless in his district, advocating for teachers of color, and trying to stop the newest trend in smoking amongst teenagers.

Born in Chicago, this son of a civil rights theologian came to college in Minnesota, met his wife for brunch and has been here ever since. Listen to Senator John Marty talk about the importance of health care, climate change, and the youth of today. Besides writing his “Apple Pie” column, he also loves the outdoors, snowshoeing, and the Como Zoo.

Growing up in Puerto Rico, where politics is the “national sport”, Senator Melisa Franzen has long been focused on creating a more just society through law. Thanks to the guidance of a mentor, she arrived in Minnesota where in addition becoming a lawyer and advocating for Minnesota’s Latinx community, she began a family. Learn more about Senator Franzen, perhaps the Legislature’s only snowmobile-owning bi-lingual lawyer.

Roots are a major theme for Senator Kent Eken, who lives on the farm his great-grandparents built in Northwestern Minnesota. These same roots are part of how he got involved in public service and are the reason he is fighting for Minnesota’s most vulnerable. Learn more about how Senator Eken “pilots” his role as a legislator and the unique situations facing rural Minnesota.

Politics run in the family for Senator Nick Frentz, whose mom worked in the California State Senate for 13 years. Though born on an Army base in Japan, Frentz and his family has roots dating back 150 years to the Mankato area. His commitment to community-building shows through h his years of coaching youth sports, but also through his legislative priorities of addressing Minnesota’s affordable housing crisis and advocacy for Highway 14.

Born in Laos during the Vietnam War, Senator Foung Hawj’s journey included time in a refugee camp, and stops in South Dakota, Kansas, and Texas before settling in Minnesota. These experiences have instilled a lifelong passion for equity, a legislative career focused on helping the working poor and marginalized communities, and a commitment to inclusivity. Hear how the American dream played out for Senator Hawj including appearances by TPT’s Almanac, the Boundary Waters, and Kansas City BBQ.