The average debt load for a student graduating from a Minnesota state college is approaching $31,000 – marking us fifth in the nation for student debt. While part of this ranking is due in part to our high college participation rate, the staggering amount of debt is slowing graduates’ ability to save for a home, get married and start a family. After several years of DFL-led tuition freezes, the Minnesota Senate is ramping up support for higher education this year with an innovative solution to the problem. 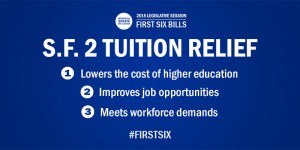 The Higher Education Loan Relief Bill (or WorkMN) calls for free two-year college tuition at any Minnesota state community or technical college. The bill allows any Minnesota public or private high school student to receive free tuition for two years after taking into account any federal and state grants they may have received. The free tuition is contingent on the student meeting satisfactory requirements set by the college they are attending.

This bill is meant to serve as another option for Minnesota students seeking either a two or four-year degree and helps clear a pathway for those students who face barriers to higher education programs. Another goal of this legislation is to boost the state’s economy by educating skilled workers that strengthen Minnesota’s infrastructure and human resources. Ultimately, the hope is that this WorkMN legislation will help all young degree-seeking Minnesotans regardless of where they live in the state. (S.F. 2)