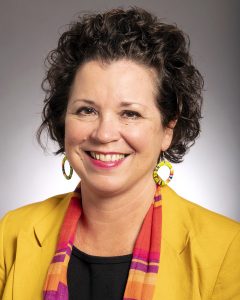 Senator Mary K. Kunesh was first elected to the Minnesota House of Representatives in 2016, served for 2 terms before coming to the Senate in 2021. She represents Senate District 41, which covers the communities of St. Anthony Village, New Brighton, Hilltop, Columbia Heights, Fridley, and a portion of Spring Lake Park.

Kunesh was born in Saint Paul and raised in Sartell, Minnesota. Her mother is an enrolled member of the Standing Rock Sioux Tribe, and her father a former St. Cloud City Attorney, and later Assistant Stearns County Attorney. She attended St. Catherine University, graduating with a Bachelor of Arts in elementary education in 1995, and later St. Cloud State University, graduating with a Master of Arts in information media in 2010. She retired from her role as a library media specialist for Robbinsdale Area Schools in November 2020, most recently Robbinsdale Middle School. Kunesh resides in New Brighton and has three adult children.

Sen. Kunesh currently serves on the Redistricting Committee, E-12 Committee, and is the DFL lead on the Mining and Forestry Committee.