Metzen to Retire from Senate after Current Term 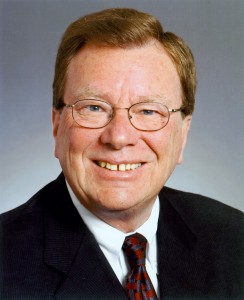 ST. PAUL, MINN. — District 52 State Senator Jim Metzen (DFL – So. St. Paul) has announced he will not be seeking re-election. A former President of the Minnesota Senate and current Chair of the Senate Commerce Committee, Metzen was first elected to the House of Representatives as a 31-year old and served six consecutive terms. He was then elected to the Senate in 1986 and handily won re-election eight times culminating in 42 years of legislative service. Metzen, a retired bank executive, has long been seen as a moderate legislator known for encouraging bipartisanship in the legislative process.

“I have always been pragmatic in my approach at the Legislature. When my term is completed it is my hope that my constituents believe I represented them well and those that came in contact with me at the Capitol believe I was fair,” said Sen. Metzen. “No matter if you were a Democrat or Republican, I tried to form friendships and alliances with people.”

Last year Senator Metzen announced he was receiving treatment for cancer at Rochester’s Mayo Clinic. More than 300 friends, including current and former Republican and Democrat elected officials, honored the longtime lawmaker at a South St. Paul reception last month. Local officials as well as Senator Amy Klobucher, Lt. Governor Tina Smith, and former Governor Tim Pawlenty were some of those who spoke at the event recognizing Senator Metzen for his decades of service.

“I would like to thank my constituents for giving me the opportunity to serve them at the Capitol. It has always been a privilege to say I represent my hometown of South St. Paul and the surrounding communities. Additionally, not enough can be said about my family, staff, friends, and colleagues that have supported me through my many years of service. I will continue to seek their support as I finish the term my constituents elected me to at the Senate,” said Sen. Metzen.