MSSWA gives Wiger its 2015 Legislator of the Year Award 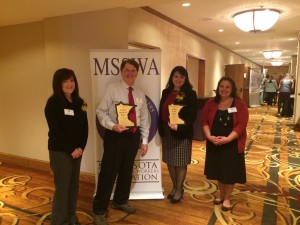 SAINT PAUL, Minn.  – The Minnesota School Social Workers Association (MSSWA) presented Sen. Chuck Wiger (DFL-Maplewood) with its 2015 Legislator of the Year Award recently. According to the president of MSSWA, leaders of the group chose to honor Sen. Wiger for his willingness to listen to and work with school social workers and his understanding of the unique roles they play in Minnesota schools.

“I’d like to thank the MSSWA for their tireless work over the past few years of advocating for increased funding for student support services. Specialized instructional support personal like social workers, psychologists, school nurses and counselors are critical to meeting the social, emotional, physical and academic needs of all students. It is my hope that the 2016 session will see more success in funding these essential school workers who make a huge difference in the lives of students,” said Sen. Wiger.