As the legislative session enters its final months, the biggest topic is the budget surplus and what to do with it. A number of plans have already been put forward by the House and the Governor, and the Senate has recently outlined its proposal as well. 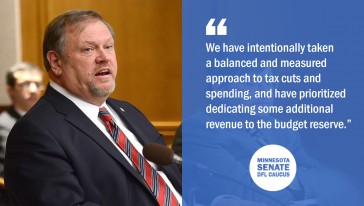 Senate targets deliver on a promise of taking a balanced, forward-looking approach to careful fiscal management by increasing the budget reserve, implementing thoughtful tax relief, paying back previous budget shifts, and investing in priorities shared by all Minnesotans. The Senate DFL is building on the successful approach of the past two years that brought structural balance to the state budget. The result is a $1.9 billion surplus, an increase in the state’s budget reserve, and fiscal stability while still finding ways to invest in education and health care.

While the surplus is an undeniable sign that Minnesota is on the right track, those figures are not adjusted for inflation, meaning there is much less of a surplus than the numbers indicate. Proposals to dramatically increase spending or calls to “give it all back” seem extreme given the uncertainty of any economy. The Senate has chosen a middle ground and is preparing to take on the difficult path of fiscal responsibility while making key investments in shared priorities.

The Senate budget is a far cry from the fiscal instability the state suffered in the late 1990s and early 2000s, when years of major tax cuts and a lack of foresight led to a $4 billion structural deficit in 2003. In those years, a limited budget reserve was not enough to save Minnesota from economic hardships and years of cuts to key programs.

The Governor’s proposed budget invests in many essential programs throughout our state, while the House proposal spends down the surplus by spending over $2 billion in tax cuts: more than the available $1.9 billion surplus. The idea to implement large tax breaks while we have a surplus is initially appealing, but in order to cut taxes at this scale and still invest in campaign promises means there are winners and losers. The House proposal cuts $1.1 billion from Health and Human Services, hurting our seniors and our most vulnerable Minnesotans. This approach, with a budget surplus, is not a responsible way forward for Minnesota.

Both plans have good ideas and good intentions; the Senate proposal uses some of both to give back some of our hard-earned surplus in tax cuts while still investing carefully in the schools, programs, and reforms that put us on steady financial footing in the first place. This is not a dramatic, headline-grabbing budget, but it is a responsible and sustainable one.