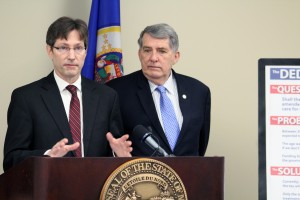 By 2030, Minnesota will see a dramatic demographic shift as more than 1.3 million Minnesotans will be over the age of 65, nearly doubling the senior population. Of those 1.3 million Minnesotans, approximately 70 percent will need some type of long-term care – but funding is exceptionally inadequate to meet the growing demand. To address this lack of funding, the Dedication Amendment would allow Minnesota voters to decide the question:

“Shall the Minnesota Constitution be amended to dedicate funding to long-term care for seniors and people with disabilities?”

“We currently have dedicated funding sources in our state constitution for entities ranging from the arts to parks and trails to wild habitats,” said Sen. Eken. “If passed, long-term care would join this list – and if anyone needs constitutionally dedicated and protected funding, it’s our most vulnerable citizens. We cannot prevent the inevitable, so let’s start this conversation.”

“This age wave will consume all other areas of our state budget if we don’t take action – and that’s a big challenge to take on,” added Rep. Newton. “How do we solve this challenge? As of now, the Dedication Amendment is the only solution that’s been proposed, but that doesn’t mean it’s the only answer. The most important thing is that we start this very serious discussion, and we start it now.” 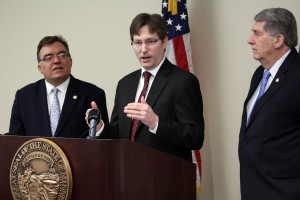 This funding would raise more than $1 billion per year that would be dedicated solely to long-term care services for seniors and people with disabilities. Set up for 25 years (as is the Legacy Amendment), the dedicated funding would follow the expected increase of this demographic challenge, providing critically needed funding while the state experiences this change.

Here’s how the math breaks down:
According to 2012 report from the Social Security Administration, Minnesota leaves approximately $20 billion untaxed for social security — a benefit that applies to only the wealthiest 4 percent of the state population. If we remove the cap on taxable income above $118,500 and apply the same 6.2 percent tax that employees pay into social security, we would raise around $1.2 billion per year.