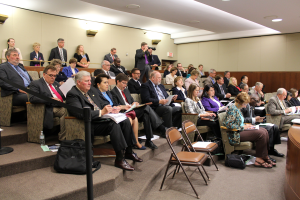 Sen. John Hoffman (DFL-Champlin) voted for good governing on Friday, taking part in his first legislative special session since being elected. The Minnesota Legislature met on Friday morning to vote on six bills that they either didn’t have time to address during regular session, or were vetoed by Governor Dayton. Sen. Hoffman says while he didn’t agree with everything in all of the bills, 9,500 state workers jobs were on the line and that’s where his mind was when he cast his votes.

“When I ran for the Senate, I ran in the name of good government and getting things done for the people of Minnesota — and against partisan bickering and finger pointing. During today’s special session I voted for the bigger picture, and that meant keeping 9,500 state employees on the job, it meant not forcing these employees to make tough decisions about feeding their families and paying their bills.

Good governing sometimes involves tough decisions, but I’m proud to stand up for the people of Minnesota and put aside my differences for the common good of our state,” said Hoffman

Below is a brief breakdown of the six bills that were passed Friday.

E-12 Bill: $525 million to fund a 2 percent per pupil formula increase for FY16 and FY17, an $89 million historic increase for early childhood education including $30.75 million for School Readiness and $48.25 million for early learning scholarships. The bill also includes $10 million in Compensatory Pilot grants for seven school districts including Anoka-Hennepin.

Jobs/Energy/Housing Bill: $50 million to fund a variety of successful DEED programs including the Minnesota Investment Fund, a Workforce Housing Grant Program and Job Training grants. Energy policy changes in the bill include a Clean Power Plan to comply with a federal rule and authorization for electric utilities to propose an Energy-Intensive Trade-Exposed rates.

Agriculture/Environment Bill: This bill includes many changes from the vetoed bill including repaying the Closed Landfill Investment Fund, changes to the Minnesota Pollution Control Agency (MPCA) enforcement, and allowing for amnesty for self-reported violations by regulated parties across the state. Money is also appropriated for three MPCA remediation sites. The bill appropriates money for agriculture research and education, an advanced biofuels production incentive and significant dollars to address avian influenza.

Legacy Bill: $538.6 million to fund four specified funds including Outdoor Heritage, Clean Water, Parks and Trails and Arts and Cultural Heritage. The bills appropriations are consistent with the recommendations of the Lessard-Sams Outdoor Heritage Council.

Bonding Bill: $180 million to fund investments in transportation, an emphasis on immediate needs at state colleges and universities, flood relief and mitigation, and an effort to fix and build essential infrastructure like wastewater facilities and water pipelines.