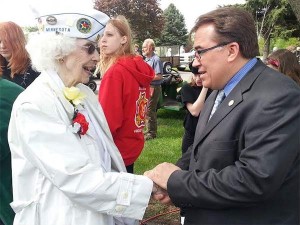 ST. PAUL, Minn. – Due to action taken during the 2014 legislative session, Minnesota became the first state to designate an entire month to honor veterans. The creation of Veterans’ Voices Month, officially signed into law this spring, is of national significance and is the culmination of members of the legislature working together with the Minnesota Humanities Center and veterans throughout Minnesota. Senator John Hoffman (DFL-Champlin, Brooklyn Park and Coon Rapids) is the chief author of the bill and explains how the creation of the month will increase our state’s recognition of veterans.

“Veterans’ Voices Month honors our veterans and builds a deeper and stronger connection between women and men who served in the military and those who haven’t,” said Sen. Hoffman. “Minnesota veterans have been the leaders in bringing their idea for Veterans’ Voices Month forward and led the way through the legislative process.”

Sen. Hoffman added, “We will recognize and celebrate veterans throughout the month of October and educate the public about what it means to have served and we will do this through the schools and community based events. I am proud of this successful legislation and thank my colleagues and Governor Dayton for their unanimous support.”

On July 8, 2014 Governor Dayton, Sen. Hoffman and House chief author Rep. Jerry Newton gathered with Minnesota and out-of-state veterans, members of the legislature and representatives of the Minnesota Humanities Center in a ceremonial bill signing declaring every October as Veterans’ Voices Month in Minnesota.

For more information you can contact Trista Matascastillo, Minnesota veteran and program officer for the Humanities Center’s Veteran Voices program at trista@mnhum.org