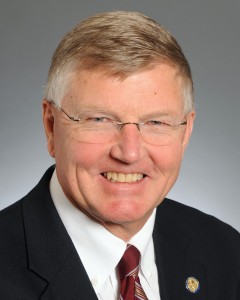 SAINT PAUL, Minn. – The Senate Capital Investment Committee, also known as the Bonding Committee, will be touring Bemidji on Oct. 1. The Bonding Tour is made up of senators who serve on the committee, state experts from Minnesota Management and Budget, and local elected officials. Sen. Tom Saxhaug (DFL-Grand Rapids) will be joining the tour while his colleagues are visiting sites in his district.

$3 billion in proposals for state bonding money have been submitted to the committee, which will allocate approximately $1 billion to projects during the 2016 legislative session. Sen. Saxhaug is chief authoring bills for two local projects: the construction of a new, larger regional dental facility and the Northern Minnesota Veterans Home to serve 16 counties and four reservations.

The Northern Dental Access Center in Bemidji is a regional community access dental clinic for low income Minnesotans. The nonprofit opened in 2009, and its strong growth has outstripped the current building’s capacity. “Over 60,000 people in rural northwest Minnesota have Medicaid, and the current dental facility simply can’t provide care for those who need it,” commented Sen. Saxhaug.

The number one bonding priority for Sen. Saxhaug is the creation of the Northern Minnesota Veterans Home. The region is home to over 31,000 veterans, who are geographically isolated from existing facilities and remain underserved.

“Bemidji is a natural fit for a veterans home.  The entire community will benefit greatly from having these brave men and women who served stay close to their homes,” remarked Sen. Saxhaug.

Sen. Saxhaug is also helping local officials pursue funding for the Bemidji Community Arena and Neilson-Reise Arena through the “Mighty Ducks” Grant Program, which has been partly funded through bonding money each of the last two years. Mighty Ducks aims to preserve Minnesota’s state sport through safety and infrastructure improvements to local ice arenas. Sen. Saxhaug commented, “Hockey is a way of life in Northern Minnesota. We need to make sure that our rinks are usable for years to come and are safe for players and spectators.”

Bonding funds would assist in the design and construction of the projects; the proposal for the regional dental facility requests $3.5 million, and the Northern Minnesota Veterans Home would require $15 million if funded fully. A complete schedule of the Northwest Minnesota bonding tour has been posted on the Senate’s bonding website Build.MN, which can be found at: http://build.mn/. The site also hosts pictures, blogs, and details about bonding projects across the state.