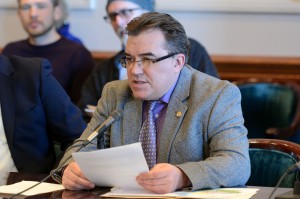 ST. PAUL, Minn. – Thanks to the hard work of Sen. John Hoffman, (DFL- Champlin, Brooklyn Park and Coon Rapids) persons with disabilities and their families are one step closer to having the financial supports they need. The following bills were all chief authored by Hoffman and included as part of the Senate’s Health and Human Services Finance Bill that passed late last week.

The Achieving a Better Life Experience Act (ABLE Act) allows families with children with disabilities, and individuals with disabilities to set up tax-advantaged accounts similar to the 529 higher education accounts. These savings accounts can help the person with a disability work towards gaining more independence. Currently, people with disabilities are limited to saving up to $2,000 and can lose eligibility for public benefits if they exceed that amount. Passage of the ABLE Act will allow savings of up to $14,000 per year.

“The Minnesota ABLE Act is estimated to improve the lives of up to 100,000 Minnesotans. This legislation is about putting people first, and is a long overdue recognition of the profound and significant extra costs people with disabilities and the blind must endure,” said Hoffman. “I’m so proud to have authored this bill which will make a dramatic improvement in the lives of so many.”

In the complicated world of Medical Assistance (MA), there exists several provisions which put seniors and persons with disabilities at a significant disadvantage. Hoffman authored two pieces of legislation that passed last week that address the inequities in the current Medical Assistance “spenddown” system.

The second bill will make it easier for the health care community to provide services for persons with disabilities and seniors. Currently, when someone has to spenddown their income by receiving medical care, the provider has to act as a collector to get their payment. This legislation would place the collection burden on the state and require the state to reimburse the provider for the full MA rate of the services provided.

“Passing these MA spenddown bills is all about fairness and bringing equity to the world of MA eligibility. This session the Senate really focused on improving the lives of persons with a disability and seniors,” said Hoffman.

The Senate’s HHS Finance Bill’s next stop is a conference committee with the House of Representatives.