“In every walk with Nature, one receives far more than he seeks.” – John Muir

It was heartwarming to observe the dozens of supporters of the Lake Links Trail project who attended the recent Senate Capital Investment Committee hearing on Senate Bill 3957. This is the measure that is intended to provide funding for completing the trail around White Bear Lake.

I am the principal author of SF 3957, along with a bipartisan list of local and influential senators including Roger Chamberlain, Sandy Pappas, Karin Housley and David Senjem.  Along with other members of the committee, I was totally impressed with the passion and preparation of the Lake Links group.

Dressed in neon yellow shirts, the advocates testified about the benefits of the completion of a trail around White Bear Lake – safety being the number one issue. The event stood as a landmark occasion in the 20-year fight for the completion of this route. 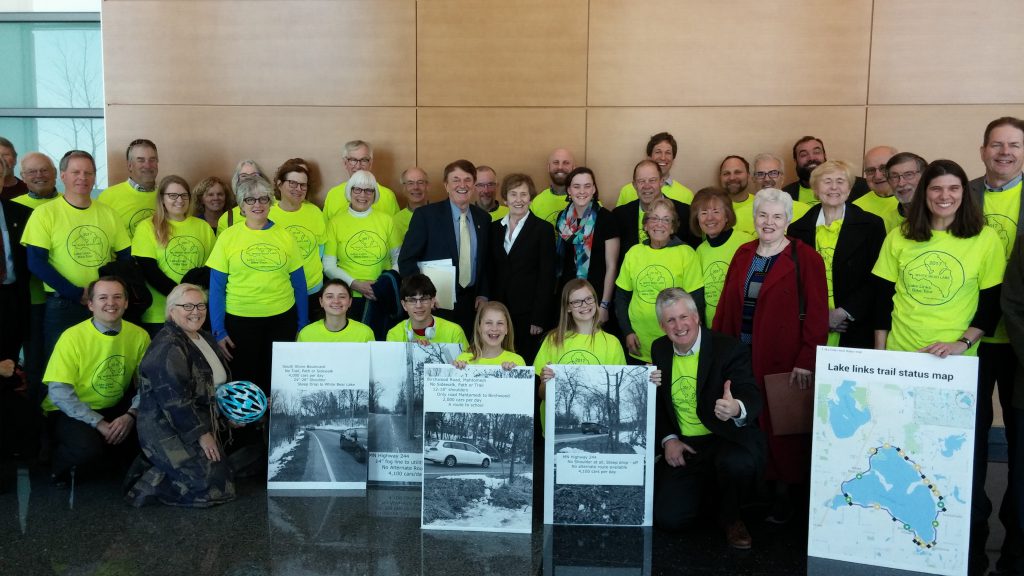 The House hearing on the companion bill to fund Lake Links, House File 4416, also went very smoothly, thanks to bipartisan support from principal author Rep. Peter Fischer and additional local sponsors Rep. Matt Dean, Rep. Leon Lillie and a group of dedicated advocates. Peter, along with testifier Kevin Donovan of the Mahtomedi School Board, stressed the strong, coordinated grassroots effort behind the project.  One member of the House committee commented about his personal experience with the unsafe areas of the route.

In 2000, the Minnesota Legislature appropriated $175,000 for the Lake Links Trail Master Plan, which included the creation of a trail around White Bear Lake. The 10-mile-long path would provide a safe place for walking, as well as a biking route for both commuters and the recreational cyclist.

Four of the 10 miles around White Bear Lake remain almost impassable for pedestrians and bicyclists. In these areas, there are no parallel roads to use. For much of that four miles, state highways and county roads occupy narrow former railbed or limited right of way which is now over-burdened with traffic. These areas are at the north and south ends of the lake.

The completed trail would connect to existing regional and trails including the Gateway and Brown’s Creek State Trails. There are also more than 15 athletic and charity events that take place around the lake annually. The MS 150 brings more than 3,000 bicycling participants to the area.  Most of the more than 10,000 users of the route, however, are local residents just out for a walk or ride near their homes.

Completing the trail, which has the support of all eight communities near the lake and passes through five of them, and two counties, is a challenge. Getting as far as we have on this project speaks to the leadership of passionate volunteers such as Steve Wolgamot and Mike Brooks, co-chairs of the nonprofit Lake Links Association. It has been an honor to work with them.

Steve and Mike have done a magnificent job of raising awareness about areas of the trail that still remain incomplete. In fact, nearly four of the ten miles are currently unsafe or impassable for pedestrians or bicyclists.

Working with the advocates, and with the bipartisan support of the authors listed above, I introduced SF 3957, which would fund the rest of this long-awaited project. SF3957 seeks $8.8 million in funds to be appropriated to the Metropolitan Council. The money will then be distributed in the form of grants to the various jurisdictions to finish the trail. Rep. Fischer and local Democratic and Republican Representatives introduced the companion bill, HF 4416, in the house.

Steve Wolgamot, who is also a member of the Mahtomedi City Council, explained to the Senate committee that, “safety is our major concern. A trail is like a bridge. If you don’t build the whole thing, it really doesn’t work. We have very nearly universal community support for this project.”

Lily Engebretson, a senior at Mahtomedi High School and president of the high school bike club, said that she and other members of the bike club were looking forward to having access to a safe biking trail around White Bear Lake.

I am impressed with how this project has brought our regional communities together. White Bear Lake Mayor Jo Emerson stressed the cooperation involved, explaining that eight communities have expressed their support. “This trail will be a regional connection,” she explained. “It is a quality of life issue.” Even before its completion, the Lake Link Trail is uniting us in conversation and a common mission. I am looking forward to the even greater relationships and friendships that develop as the trail is finished.

While there is intense competition for state dollars to fund projects throughout Minnesota, I feel good about our efforts to gather evidence and make our case. If adequate funding comes through, the Lake Links Association anticipates that construction should be finished by 2020.

As always, please contact me with questions or suggestions regarding any issue. I encourage you to visit me at the Minnesota Senate Building, Room 2219. Let me know if you would like me to stop by your home or apartment. I can be reached by email at sen.chuck.wiger@senate.mn, and by phone at 651-296-6820, or 651-770-0283.