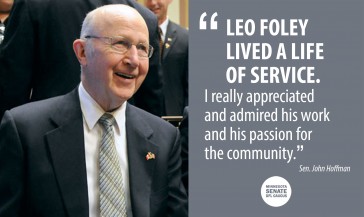 “I first met Leo in 2002, and ever since then I was incredibly proud to call him my State Senator. Leo Foley lived a life of service, first for 33 years as a Minnesota State Trooper, and later as an assistant Anoka County Attorney and as a senator. I really appreciated and admired his work and his passion for the community. Leo always had an ear to listen, and you could sense he really cared about improving the lives of those he represented. He will be missed by all who knew him,” said Sen. Hoffman.

A Celebration of Leo’s life will be held on Saturday, Feb. 13 at 11 a.m. at First Congregational Church of Anoka. Visitation will be held one hour prior.