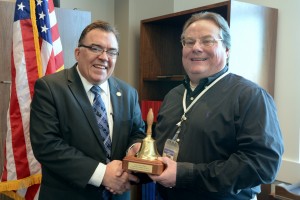 Sen. Hoffman with Tom Heidmann, a board member of the Anoka-Hennepin School Board and Minnesota School Boards Association representative.

ST. PAUL, Minn.— The Minnesota School Boards Association (MSBA) awarded Sen. John Hoffman (DFL-Champlin) on Tuesday as one of its “Legislators of the Year” for 2015. According to MSBA, Sen. Hoffman was selected for the award in part due to his extensive work to make sure all schools in Minnesota are equitably funded. Hoffman says it’s an honor to be recognized.

“I’d really like to thank MSBA for being such a great partner over the last year. As a former school board member I know where they are coming from and I respect their hard work and efforts to improve public schools across the state. Bringing equity to school funding is an ongoing issue which I remain committed to working on as a senator representing the largest school district in the state of Minnesota,” said Sen. Hoffman.

Sen. Hoffman’s district encompasses the Anoka-Hennepin School District as well as the Osseo School District, together the two districts serve more than 60,000 students.

The award recognizes legislators for their work at the Capitol on the behalf of Minnesota’s public school students and for ensuring local school board members’ voices were heard.

Sen. Hoffman was selected for this award for the following contributions: