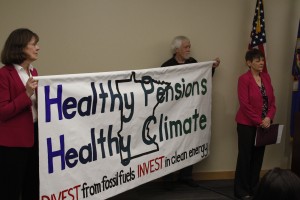 Senator Sandy Pappas (DFL – St. Paul) and Representative Melissa Hortman (DFL – Brooklyn Park) held a press conference today to discuss legislation that seeks a report evaluating fossil fuel investments by the State Board of Investment for public employee and teacher pension and retirement funds. The report is a first step toward evaluating Minnesota’s pension investments in fossil fuels, with the ultimate goal of divestment.

Along with advocates from Divest-Invest Minnesota and MN350, the legislators explained that the bill is a necessary step in helping us understand how pension dollars are invested, how solid the fund is moving forward, as well as the risks that some of those investments may pose. 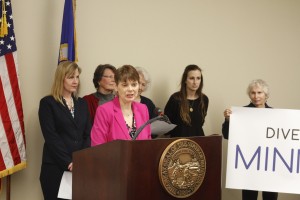 “The State Board of Investment has a very good record of making pragmatic investment decisions based on the current and projected long-term profitability of publicly traded companies,” said Sen. Pappas. “Seeing an industry that is predicted to become less profitable – because of a world-wide campaign to stem CO2 pollution in the atmosphere – is a red flag that should prompt important portfolio re-evaluation. These are environmentally destructive companies that profit from fossil fuels and they could soon prove to be financially risky for us.”

According to the 2015 Deloitte Report, 35 percent of independent oil and gas companies are at “high risk” of bankruptcy in 2016. Over the last five years, the value of coal stocks has declined by 85 percent and that of oil and gas stocks by 29 percent.  The State Board of Investment has invested $2 billion in the top 200 fossil fuel companies – a risk that advocates maintain can jeopardize the pension dollars that retirees receive.

“Minnesota retirees depend on the financial strength and security of their pensions,” said Rep. Hortman. “Current employees expect to be able to depend on that security also when they reach retirement age. An increasing number of Minnesotans realize that potential stranded assets of fossil fuel industry reserves may jeopardize their financial futures. They deserve peace of mind, and this bill is the first step in ensuring their financial security during retirement.”