Senator Wiger – The power of a single idea: how a bill becomes a law

The lawmaking process can seem complicated and far away from average day-to-day life, but many of the most important laws have been brought to me by you – my constituents.

Legislators are now considering our next state budget plus numerous policy ideas. Many proposals, described in “bills,” provide a variety of ideas on what should be done. Legislators, the Governor, and many groups and citizens, advocate for and against bills depending on their viewpoint. Your views are considered and appreciated by me.

I am sponsoring many bills this session. Several of my proposals originate from constituents — ideas shared at community meetings, door knocking or phone calls and follow-up. Some examples of local, citizen-initiated bills I sponsored that become law include: a safer workplace in hospitals, additional funding/program improvements for schools, tax law changes for equipment purchases, transportation and trail improvements, domestic violence prevention/housing, and many more.

A bill that becomes law starts with a bright idea. A person then brings the idea to a member of the Legislature. The ideas are discussed in committees of the Senate and House. This year I am serving on the E-12 Education Finance Committee and the Local Government Committee.

A good example of how a bill becomes law is the Race 2 Reduce water conservation program.

Advocates who wanted to address the sinking water levels of White Bear Lake came to me several years ago with an idea.

The advocates were trying to expand the Race 2 Reduce programming in several schools in my district. The programming partners local kids with schools in other countries to help Minnesotans learn how other cultures view water. The lessons were all part of a plan to raise awareness about water usage, and to engage participating communities in water conservation efforts. Knowing how incredibly important water conservation practices are, I agreed to author a bill to get $150,000 for the program that would allow it to expand across our area.

This process perfectly illustrates how an idea or problem in a community can turn into an idea for a bill. That’s exactly what happened with the Race 2 Reduce legislation. A group of concerned educators took a very real problem in their community, created a program to teach kids about it – and then wanted to expand their program in the White Bear Lake and Mahtomedi school districts. In order to expand, they needed money – and that’s where the idea for the bill came from.

Before a bill can be processed through either the House of Representatives or the Senate, it must first be given its first formal reading. The first reading occurs when the bill is introduced, given a file number and assigned to a committee for study. The first stop for the Race 2 Reduce appropriations bill was the Senate Education Committee. We invited teachers and students familiar with the program to the Capitol to testify in front of Senate Education Committee members.

This testimony is all part of the process of how a bill becomes a law. Committee members will discuss the pros and cons and then take one of several courses of action. The committee can recommend the bill to pass, move it to another committee or send it directly to the Senate floor for a vote. The committee could also simply defeat the bill.

After a bill is reported out of its final committee, it is given a second reading and placed before the entire Senate or House body for discussion and consideration. Once a bill is placed on ‘General Orders’ senators will get a copy of the bill and are given at least 24 hours to learn more about the bill before they are asked to vote. After senators are given time to consider the bill, it is read out and a roll-call vote is taken. Thirty-four votes are needed to pass most bills in the Senate.

If a bill passes in the Senate, it’s sent over to the House of Representatives where it goes through a very similar process. If the House passes an identical bill to the Senate it’s then sent on to the Governor. If the House passes an altered version of the bill, a conference committee is assembled which is composed of half senators and half representatives to work out a deal that both sides can agree on. Once the Governor sees a bill that has passed both bodies, they can sign the whole bill, sign the bill with line-item vetoes or simply veto the bill altogether.

If the Governor signs the bill, the bill becomes law. The Race 2 Reduce bill was rolled into a larger Education Finance Bill. This bill was eventually signed by Governor Dayton. The Race 2 Reduce program received its money and the program is expanding its message to more school kids in the east metro. It’s a complicated process – but it’s worth the effort. Ideas should be fully scrutinized before they become law – and that’s exactly the purpose of the Minnesota Legislature.

The bills that I am authoring this session cover the following topics:

I am also working on other proposals now, many that were initiated locally.

If you’re interested in looking up a specific bill you can find that here: https://www.revisor.mn.gov/bills/status_search.php?body=Senate

If you’d like to learn more about the law making process, visit: http://www.senate.leg.state.mn.us/publications/billlaw.pdf 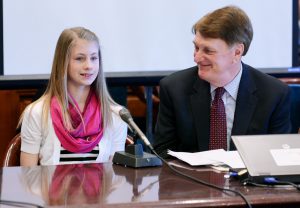 Sen. Wiger in a Senate legislative committee with constituent Sophie Davis to testify on the Race 2 Reduce legislation

As always, please contact me with questions or suggestions regarding any issue. I encourage you to visit me at the Capitol, or let me know if you’d like me to stop by your home or apartment. I can be reached by email at sen.chuck.wiger@senate.mn and by phone at 651-296-6820 or on my cellphone at 651-770-0283.