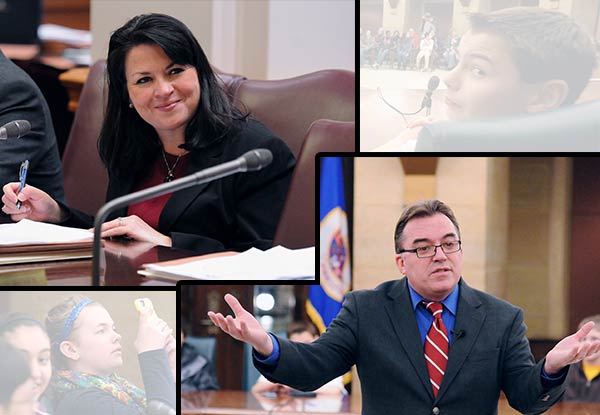 Unfortunately, misconceptions and deliberate distortions about the Safe and Supportive Schools Act have tested the bill from the very beginning. Testifiers at the Senate’s hearing on the Safe and Supportive Schools Act this week gave startling testimony – about themselves and their children’s experience with bullying. From one mother’s testimony about her severely bullied 12-year-old son who killed himself to a father whose son was the victim of such brutal physical violence at school it required serious medical attention – the graphic and emotional testimony was such that a listener might be sure they were testifying in support of this anti-bullying bill. But they weren’t.

Their reasons? These testifiers argued their children didn’t fall into a specific protected category of LGBT, race or disability cited in the Safe and Supportive Schools Act, that somehow their children wouldn’t be protected under this bill. And here is where we, as two freshman state senators who strongly support this bill — want to lay the facts on the table.

Minnesota’s bullying laws are currently the “weakest” in the nation according to the U.S. Department of Education. The current statute is only 37 words long, and it lacks the definitions, guidance and tools schools need to keep kids safe.

A 2010 study by the state departments of Education and Health found that 13 percent of ALL Minnesota students reported being bullied once a week or more. That 13 percent includes students with learning disabilities, students who get straight A’s, kids of varying ethnic backgrounds, LGBT students, physically disabled children, students of low-income upbringings, students of all shapes and sizes—really students from all walks of life.

How do we nurture the well-being of that 13 percent? We can listen, learn, take action, and work towards prevention.

As a mother and former PTA President and as a father and former Vice Chair of the Anoka-Hennepin School Board, we wanted to share our unique perspectives on the issue of bullying and our support for the Safe & Supportive Schools Act and why we believe we must accomplish meaningful change for all Minnesota kids, including our own.

After listening to hours of gripping testimony in legislative hearings, we want to more clearly put to rest any misconceptions about this bill. First we want to tackle the claim that only certain protected categories of children will be benefit from the bill. This is blatantly untrue, and a false claim that has been widely circulated by a small group who have no facts to back up their rhetoric. This bill includes unequivocal protection for ALL students.

Another often repeated argument about the bill is that it comes with unfunded costs for school districts to implement. Our response is this: bullying and harassment can lead to students missing classes, being suspended, dropping out or even committing suicide. The lawsuits that followed student suicides in the Anoka-Hennepin School District not only brought to light the gross inadequacy of our state’s anti-bullying laws, they were also costly. This bill includes $1 million to help schools develop effective policies and also provides local districts with access to up to $7 per student through the existing Safe Schools Levy.

Other even more outrageous claims have stated that the bill includes sexually explicit curriculum as well infringes on free speech. These are both false and only distract from meaningful dialogue about trying to protect our children. In addition, this bill specifies protections regarding students’ constitutional rights, including free speech.

During a legislative hearing on the bill, the only opposition seemed to come from adults. We’ve seen how even well-meaning adults can unknowingly make a bad situation worse with the wrong advice. That’s why this Safe & Supportive Schools legislation, which improves training for all staff and teachers, is so important for the well-being of Minnesota’s school children.

Current law does not define bullying, and individual school anti-bullying policies are not required to describe what bullying prevention plans should be in place or even who needs to be protected. The Safe & Supportive Schools Act would better equip teachers, students and school volunteers to respond to bullying in all forms by providing resources to help prevent bullying and tools for intervention.

We both have children currently enrolled in Minnesota’s schools, and we realize our own children and their classmates will be the future leaders and innovators in our communities. Our culture has changed, and our children live in a world where bullying has evolved into more horrific and publicly humiliating methods and frequently follows kids home after school. With the advent of social media comes endless avenues in which children can connect and publicize their opinions – which means that bullying is no longer something students only have to endure during school hours.

Stronger anti-bullying legislation will improve the well-being of our kids – and isn’t that what we’re all fighting for?